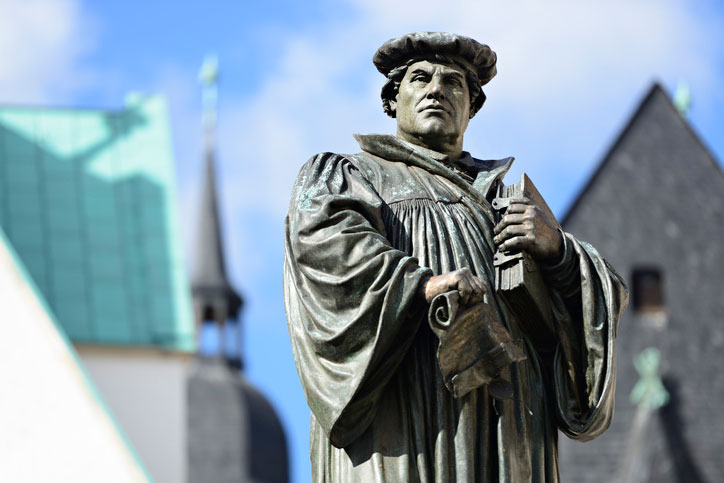 A Complete Guide to Lutheran Universities

Lutheranism emerged from the well-spring of hardy, hard-working Northern European cultures. As a result, Lutherans have always valued education. In fact, the origins of the movement in the Protestant Reformation are firmly rooted in the spread of literacy and education in 16th Century Europe.

That long-standing support for higher education has left a legacy of Lutheran universities across the country affiliated with several of the major Lutheran denominations. If you already belong to one of those denominations, choosing one of these schools is an easy fit: they will offer you on-campus worship opportunities and chances to grow your faith right in line with your current beliefs and practices.

But Lutheran universities can be a good choice for a Christian or secular degree even if you’re not a practicing Lutheran. With a fairly mainline adherence to broadly Protestant theology and a tradition that brings the tenets of faith together with the strength of a liberal arts education, you will find these schools offering both community and comprehensive learning.

Lutheran colleges provide a solid investment in your future. You’ll find this to be true whether you are called to the ministry or aiming for one of the many other jobs that a Christian degree will qualify you for, or even if you’re pursuing studies in a secular field. 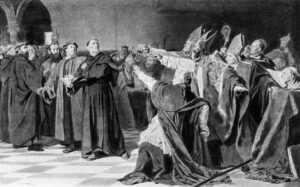 The history of the Lutheran church begins with its namesake, and the man who kicked off the Protestant Reformation that shook the Christian world in general: Martin Luther.

Luther was a monk who was ordained to the priesthood in 1507 in a part of the Holy Roman Empire that would later become modern Germany. At the time of his ordination, the sale of plenary indulgences by the Catholic Church was a common practice—a straightforward exchange of money for a certificate held to reduce the holder’s time in purgatory.

As a professor of moral theology at Wittenberg in 1517, Luther believed that for sins to be forgiven, scripture called for genuine inner reflection and repentance rather than mere sacramental confession. Indulgences, he argued in less confrontational and more scholarly language, were a fraud.

This was the start of his famed Ninety-five Theses, a foundational document of the schism of the Western church between what would become Protestantism and the remaining Roman Catholic faith.

Founded in Individual Salvation, Education Was a Key Part of How Lutheranism Spread

Luther probably didn’t intend to split the church, simply to reform it, but education was already reshaping society:

The message that salvation was available only through God’s grace and faith in Jesus as the messiah was at odds with Catholic practice—but appealed to many newly enlightened worshippers throughout Northern Europe.

As the church founded by the father of the Protestant Reformation, Lutheranism in many ways is the purest root of all the Protestant denominations today. Yet as the branch sprung directly from Catholicism, it also has a very traditional feel to it.

As with other denominations, various branches and schisms have emerged, but Lutheranism as a whole continues to stand with the doctrine that made it:

That salvation is offered by Grace alone through faith alone on the basis of Scripture alone.

For by grace are ye saved through faith; and that not of yourselves: it is the gift of God: Not of works, lest any man should boast.

Higher Education Fits Naturally in a Faith Founded by a Professor

We must have and maintain Christian Schools.

With the very name of the denomination coming from a man of learning who was a professor when he published his Ninety-five Theses, Lutheranism has a clear and strong tradition of respect for education.

Lutheranism spread through the United States through immigration from Germany and the Scandinavian bedrock in which it was rooted.

As it came to the new world, it brought those tenets of individuality and education along with it.

The History of Lutheran Universities in the United States 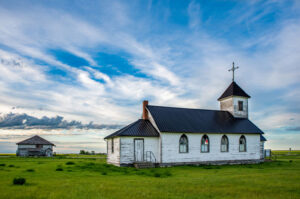 Most Lutheran parishes in the early years attempted to support a parish school that combined religious and secular education. Practicality was a strong component of the community. Lutheran students were expected to learn Scripture and skills useful in the vocational or professional world at the same time.

By the late 19th Century, as post-secondary education become more common, Lutheran denominations in the United States began to sponsor universities as well as congregational primary and secondary schools. The ELCA, or Evangelical Lutheran Church of America, was particularly focused on college-level education. There are nearly 30 ELCA-affiliated universities in the country today. But even denominations more focused on primary and secondary education, such as the LCMS (Lutheran Church—Missouri Synod) have affiliated schools.

The Lutheran Church—Missouri Synod has congregations in all 50 states, but it represents the bulk of congregations in the American heartland, still populated by descendants of those hardy German and Scandinavian settlers who came to work the land of the Midwest. That’s also where you will find some of the educational bastions of the faith.

In most Lutheran universities today, regents are required to be active members in good standing with the Synod, and leaders and faculty must be members in good standing of congregations. Students are afforded regular opportunities for worship that are reflective of the values of the denomination. These are integrated in to the daily life and rhythms of the school and include:

As with many Christian schools, the bulk of the degrees awarded at Lutheran universities are not specifically Christian. Degrees in everything from accounting to environmental science can be found at these schools. A complete professional education offered through universities established in the Lutheran tradition is open to all.

For students who are focused on receiving a Christian degree as part of a calling to ministry, there are even more advantages to attending Lutheran schools. To serve students who are called to the ministry, these schools offer dedicated student support services that coordinate with a wide range of congregations and schools throughout the synod.

Together with the solid foundations in Old and New Testament study, theological philosophy, and church history, it’s everything a future Lutheran pastor needs to start on the pathway to service.

Lutheranism mainly relies on democratic governance, where God grants authority in the congregation to the members collectively. Voters in the smallest parishes may handle all decisions through direct vote. In larger parishes, they may delegate their authority by electing a parish planning council or church board.

In all cases, the leadership is both by and of the congregation. Pastors are ultimately decided upon and responsible to the members of the parish, not assigned by denominational authorities. This means that even undergraduate Christian degrees can meet the qualifications for many staff and leadership positions in Lutheran churches.

Because of the congregation-centric leadership in most Lutheran denominations, parishes themselves can generally select pastors based on their own standards, without formal ordination.

Above the level of individual congregations, the major Lutheran denominations in the United States operate on the basis of synods, or councils composed of representatives from various congregations or districts. Senior and associate pastors are typically ordained at the level of the denomination.

These larger organizations are the ones behind Lutheran universities and seminaries, and they set their own standards for ordination for pastors. 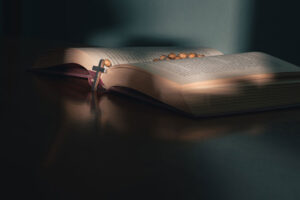 Lutheranism is known for its strongly liturgical approach to worship, with many rituals and ceremonies involved in church services. This makes a formal Christian education quite important for anyone called to the Lutheran Ministry. Because of the specific nature of Lutheran liturgical procedures, getting that education from a university that is specifically aligned with the denomination you seek ordination with is all but required.

Ministry is a calling that places great demands on pastors. A Christian education is the surest way to prepare yourself for those demands.

Lutheran churches do not believe that ordination rests in divinity, but instead serves as a ratification of the calling that clergy receive directly from the Lord.

This doesn’t mean there are no standards beyond being called, however. The typical requirements for ordained Lutheran pastors include:

In most Lutheran denominations, these ecclesiastic requirements are best thought of as a process that prepares you for the rigors of your calling. The education, training, and testing they involve should be viewed as a means by which to strengthen your abilities to fulfill the call. 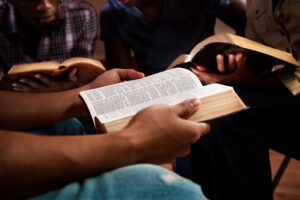 Although it’s not impossible to become ordained as a Lutheran minister without attending a Lutheran university, getting your MDiv at a seminary affiliated with your denomination can shave some time off the process. In most major Lutheran denominations, a vicarage or other kinds of formal field experience is required before or after earning your degree. With denominational MDiv studies, you may be able to wrap that requirement in with your degree program.

Applicants for ordination go before a committee within the synod, sometimes called a colloquy committee. A rigorous evaluation follows, looking at both your education and other personal development.

It’s not uncommon for the committee to recommend further steps for candidates to take before they can become ordained. It can take a year or more, even after earning an MDiv, to complete the ordination process.

Many of the larger Lutheran denominations have relationships with other Lutheran churches and may offer reciprocity for pastors on that basis.

But as any pastor will tell you, the formal training and experience you receive at a Lutheran college is really only the start of your development in the ministry. You’ll graduate with the tools you need to continue a life of prayer, compassion, and spiritual development that will continue throughout your career.