When it comes to making a unique and personal difference in individual lives, there’s no other job that does this quite like a career in hospice and palliative care.

Everyone’s life has big milestones –birth, marriage, birth of a child… and passing on to go home. This sacred field of ministry involves helping people find comfort and connection with the Lord in the last stage of life, right up to and including those final moments. Fortunately, no one is ever alone as they traverse life’s big events; Jesus is always walking with us hand-in-hand, even though it may be hard to realize this while suffering and coping with pain.

Hospice ministry takes place at the crossroads of life, the afterlife, being human, and walking with Christ. It takes a special kind of person who has a special kind of calling to do well in this field. You’ll need to be highly empathetic, attentive to people’s needs, compassionate, and hopeful.

Come to me, all you who are weary and burdened, and I will give you rest.

What Is Hospice and Palliative Care Ministry?

Hospice is a treatment stage for terminally ill people. Entering this stage signifies that medical help is no longer the most important care for a person. This stage emphasizes spiritual and emotional support for a person to keep them as comfortable as possible as they reach the end of life.

For many terminally ill people an important part of being comfortable involves a human and spiritual connection. This is especially true for Christians, even new Christians or those who have re-connected with their faith.

This ministry can be secular, providing a human-to-human experience to help feel connected and not alone. It can also be Christian themed, complete with prayers, blessings, and messages of hope and comfort.

Providing end-of-life care takes a special person and it’s not something to jump into cold. Many organizations that offer hospice care have a multi-hour training program you’ll need to complete first. This could be in-house, or through a national organization that offers education and training resources like the Hospice Foundation of America or the American Academy of Hospice and Palliative Medicine. 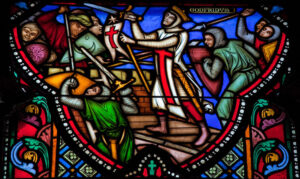 Throughout most of human history the sick and dying were cared for by their families and local communities. And throughout most of our history large groups of people never traveled far from home.

This all changed during the Crusades which characterized 11th to 15th-century Europe. Massive armies, often with their families, were on the move across continents. Battle casualties, diseases, and severe injuries meant that these groups of people in a state of constant flux needed a place to put their mortally wounded and dying. It’s here that we see the first significant development of hospices.

Fast forward to an industrialized world where children move far away from their parents and are often unable to care for them in their old age, and we see the widespread growth of nursing homes along with a resurgence in the hospice movement.

The re-invigoration of modern-day hospice is credited to a British woman named Cicely Sanders (1918-2005), and it’s no coincidence that she holds a “knighthood” equivalence from a chivalric order; a remnant of the first hospices established during the Crusades.

On the record for opposing euthanasia, Sanders played a vital role in legitimizing the concept of palliative care in the medical community.

Though a Christian, early on Sanders had the emotional experience of falling in love with a Jewish Holocaust survivor who escaped World War Two only to lose a battle to cancer just a few years later. This and future experiences with sick relatives and loved ones caused her to develop an interest in pain relief.

Sanders went to school, became a doctor, and contributed extensively to medical publications on the philosophy of palliative care. She is widely regarded as the founder of the field of palliative care. Today these concepts would not exist as we know them without her.

As for Sanders herself, she credited Psalm 37:5 as being the inspiration for her founding of the modern-day hospice movement: “Commit thy way unto the Lord; trust also in him; and he shall bring it to pass.”

What Exactly Do Pastors Who Specialize in Hospice and Palliative Care Do? 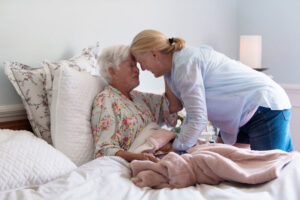 You’ve contacted a church, charity, social, or non-profit organization and you’re ready to begin your first day with a hospice client. In your first few meetings you’ll introduce yourself and get to know your client. Some topics that are useful to cover include:

During your first meetings and throughout it’s important to try and stay positive while also actively listening, and to keep the client’s needs centered.

Once you’ve established a routine it’s important to stick to this so the client has a sense of regularity and knows you’re dependable. Over time as you get to know your client better you can:

As a hospice provider you’ll also need to figure out how to handle loss as a regular part of your job.

Depending on the denomination of the individuals you are ministering to, there are some hospice duties that only a pastor can perform. These can include:

The setting for hospice care is usually: 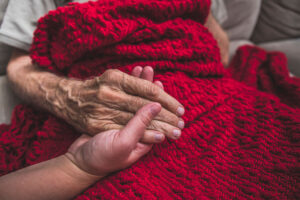 Hospice is very open to volunteers, and this is a great way to gain valuable experience and get a sense of what’s involved in this field. Inquire locally at a healthcare provider, long term care facility, or hospice provider to find out how to get started.

Once you’ve completed a short training course, you’ll be ready to get started.

You’ll bring your life experience, empathy, and compassion with you as you see clients. If you want to emphasize Christian ministry as part of the hospice care you provide then you should be well-versed in this field. This can include earning a relevant bachelor’s degree in a subject like:

Once you’ve built up your experience with clients you can think about applying for a paid hospice job seeing clients on a full-time basis.

After some time you may want to move into a managerial position. This involves coordinating with healthcare facilities and other hospice providers. Hospice managers take care of things like scheduling, contracts, releases of liability, and ensure that health, safety, and privacy rules are understood and followed.

If you’re called to be a pastor who specializes in hospice ministry then you can take this step next. As a pastor you’ll be able to perform sacred end-of-life rites, baptisms, and special blessings.

Depending on your Christian denomination, a master’s degree may be required to become a pastor. And even when this isn’t a requirement, you can still find programs that provide relevant knowledge and useful insights for hospice ministry. Examples of relevant master’s-level topics include:

Working in this field has several advantages. One is that you can find a satisfying role to play at any level –from volunteer to employee to manager to pastor– depending on your own personal goals. It’s also very easy to get involved in this field as a volunteer and learn the ropes.

If you’re a highly empathetic person you’ll find there is no shortage of people who deeply appreciate a human connection and the good news of the Lord. A career in hospice and palliative care can be tough because it’s hard to get used to losing your clients, but it’s also very rewarding because you’re making an inspiring difference on an individual level.