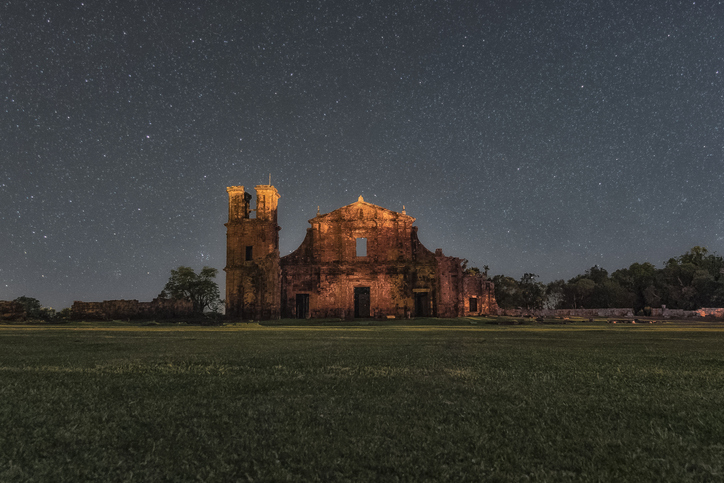 A tabernacle church is, in its simplest terms, a house of worship, a gathering place where people worship God. The term “tabernacle” has roots in both Judaism and Christianity and is also used to describe an ornamental locked box used to hold communion hosts.

Therefore, in Christian traditions, a tabernacle church is best described as a house of worship that practices Holy Communion, while the tabernacle is the special box that houses the Eucharist. Tabernacles are found in Catholic churches, along with many Lutheran and Orthodox churches.

The Hebrew word for “tabernacle” is mishkan, which means dwelling place. This term has long been used in Christianity because Christ is said to dwell in the Eucharist, although the Israelites first used it to describe the temporary shelter they constructed to worship in as they made their long journey from Egypt to Mt. Sanai.

The Purpose of the Church Tabernacle 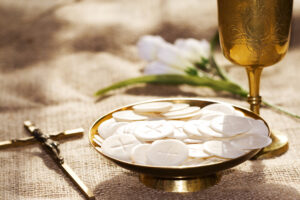 Tabernacles may be constructed of stone, wood, or metal, and in ancient times, they were constructed of gold. In the Catholic Church, canon law highlights its importance: “The tabernacle in which the Eucharist is regularly reserved is to be immovable, made of solid or opaque material, and locked so that the danger of profanation may be entirely avoided” (879-896).

The Eucharist is secured in the tabernacle until distribution during services. It’s also available when bringing Holy Communion to the sick. The tabernacle has also been a special place for reflection and prayer in Christian churches. In many churches, you’ll still find the tabernacle covered with a tent-like veil (called a conopaeum), and in the Catholic Church, parishioners genuflect when passing the tabernacle. 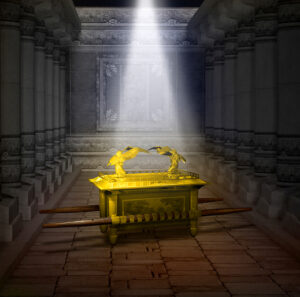 According to the Old Testament, the Israelites wandered the desert for 40 years before they entered the Promised Land.

The word “tabernacle” was first introduced in the Book of Exodus during this time while Moses was on Mount Sanai. Moses received the revelation from God about the Ten Commandments and instructions for the construction of the tabernacle while on Mount Sanai.

When Moses came down from Mount Sanai, he instructed expert craftsmen to begin the construction of the tabernacle, guided by the specifications he received from God…

“Have the people of Israel build me a holy sanctuary so I can live among them. You must build this Tabernacle and its furnishings exactly according to the pattern I will show you”

The Book of Exodus (26: 1-36) describes the tabernacle in rich detail, even going as far as to describe its dimensions, design, and construction: “Make the tabernacle from ten curtains of finely woven linen. Decorate the curtains with blue, purple, and scarlet threat and with skillfully embroidered cherubim. These ten curtains must all be exactly the same size – 42 feet long and 6 feet wide…”

The Book of Exodus’ description of the tabernacle is significant, symbolizing a gradual increase in holiness from an outer gated fence to an enclosed courtyard, to a screen, and finally to a barrier leading to the “most holy place,” the Holy of Holies where the Ark of the Covenant was kept:

“Hang the inner curtain from clasps and put the Ark of the Covenant in the room behind it. This curtain will separate the Holy Place from the Most Holy Place. “Then put the Ark’s cover—the place of atonement—on top of the Ark of the Covenant inside the Most Holy Place. Place the table outside the inner curtain on the north side of the Tabernacle and place the lampstand across the room on the south side”

After the Israelites entered Canaan, the tabernacle was established in Shiloh. Once King David conquered Jerusalem, he moved the Ark of the Covenant to his own tent-like shrine. And when Solomon built the Temple of Jerusalem, he incorporated many of the elements of the tabernacle into this new temple, which essentially became the tabernacle’s replacement.

The Temple of Jerusalem, like the tabernacle, included an outer courtyard and a sacred inner building. Later, synagogues patterned their design after the tabernacle, with many featuring an “ark” area that contained the Torah scrolls – their holiest spot, similar to the Ark of the Covenant containing the Ten Commandments.

Symbolism abounds in the Christian Church’s tabernacle. When a person receives communion, they are said to have become a human tabernacle, meaning that Christ dwells within them. While the tabernacle within the church is an inanimate object, the human tabernacle is alive and breathing and made of flesh and blood.

The tabernacle symbolizes the tabernacle in heaven (i.e., the throne of God); one place of worship; and the purification and sanctification of the body of the believer.

Because of the reverence given to the tabernacle and what it symbolizes, many churches have adopted the word as part of their name. 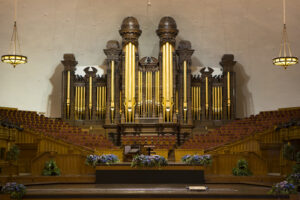 The Mormon Tabernacle Choir, which is now called the Tabernacle Choir at Temple Square as of 2018, is part of the Church of Jesus Christ of Latter-day Saints and has been in existence for more than 175 years.

It got its name from the Salt Lake Tabernacle, where it has performed since 1929.

The Latter-day Saints settlers interchanged the term “tabernacle” and “meetinghouse” to describe their earliest structures. Mormon pioneers began construction of tabernacles after entering the Salt Lake Valley in 1847.

The Salt Lake Tabernacle is an historic tabernacle that was built on the church grounds (called the Temple Square) in Salt Lake City, Utah, by these early settlers. Tabernacles were also built in St. George, Logan, Brigham City, Provo, and Ogden, among others. Today, they’re used for different religious and civic events.

The choir remains one of the most famous in the world and has performed at the inaugurations of many U.S. presidents, including Lyndon B. Johnson, Richard Nixon, Ronald Reagan, George W. Bush, and Donald Trump.